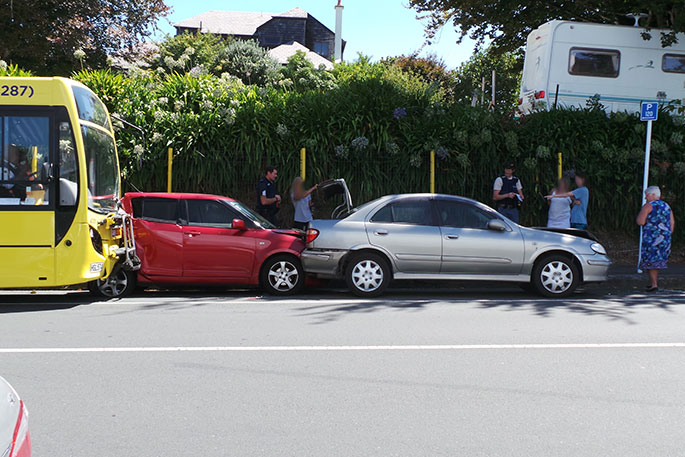 Three vehicles were involved in the crash this afternoon. Photos: Sharnae Hope.

Multiple vehicles are involved in a crash with a bus on Willow Street in Tauranga this afternoon.

The crash, which is located opposite the Tauranga Police Station, involved a bus and two parked cars.

A reporter at the scene says the bus has run into the back of one car, causing it to crash into the rear of another.

"Both vehicles are parked outside the police station," says the reporter.

"Police are at the scene speaking with witnesses. Apart from the driver, the bus was empty." 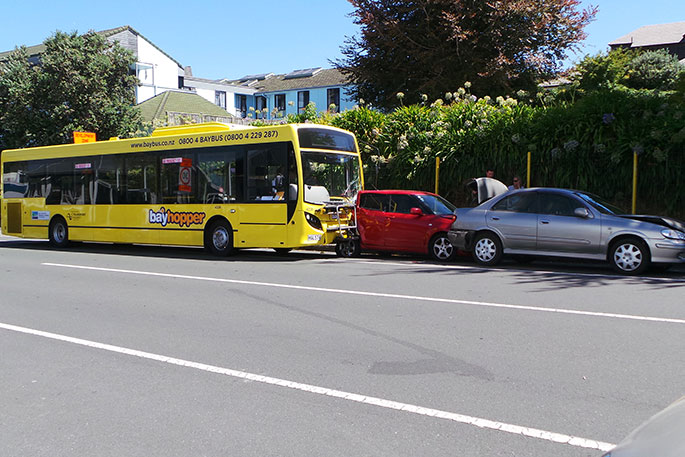 I thought this was the first driverless bus being tested in Tauranga. Wrong again it must have been the driver being so surprised that a passenger was waiting to be picked up so they didn,t see the parked car!

I was told that drivers

are having to train other drivers. If this is true then I don’t think that’s legal is it?

Gosh the bus was empty, thats not a surprise, they run around all day empty till late, last week there was one on Carmicheal rd, at 7-45pm, and last sunday, 3 buses one behind the other at 7-30 am on chapel st, for gosh sake, only run every hr,wasting fuel, and POLLUTION, im sure thet the ADS said, quote, you asked for more buses more routes, more frequent services, for gosh sake,nobody needs to be anywhere here every few minutes,gee one bus every 2hrs would be better, also a bus stop on every block,and they are outside a business,one on Cameron rd outside the Warehouse is all you need on that stretch, whats wrong with walking to town,hang on we are lazy,its a nice walk from 11th ave to town,NOW someone is going too be without a car for weeks, because of this,anyway,Thanks,10-4 out,phew.

The buses are always empty!

The buses are always empty!

now i know why my service is often late or just never turns up! Dam those parked cars

It is my understanding that this bus company is on notice with the Council, this will not help their cause. Thank goodness the two parked cars were empty as this could have been a totally different story. Methinks time for a change.

A good job it was empty or it could have been carnage. But most are so Carry on Regardless.