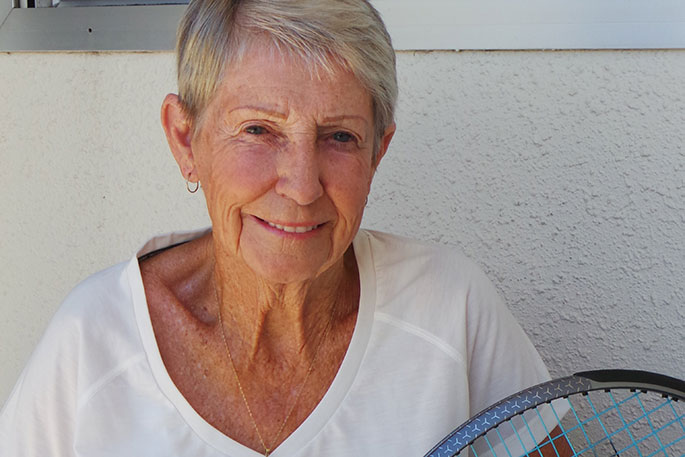 ‘Tup’ with her magical Wilson.

A chronic hip problem is about to scupper Andy Murray’s career at just 31. At 38, Roger Federer can’t have too many more Grand Slams in him.

But even at 80, Norma Lois Cox reckons she has another five seasons of tennis in her. “At least,” she claims.

The bones are good and her game is great – she’s just home from winning two golds and a silver at the New Zealand Seniors tournament in Auckland.

“I’m very happy with that,” says Norma, who’s never had to answer to her given name. She’s known universally as ‘Tup’.

“As a child, they said I was worth tuppence - two pennies. I was good value.”

Pennies as a person, but a fist full of pound notes as a tennis player. Since she turned 40 – four decades ago – Tup has won 54 National Seniors tennis titles, via 18 singles, 20 doubles and 16 mixed doubles. She’s quite rightly proud of that.

She must be quite the celebrity on the seniors’ circuit. Do a lot of people know and recognise her? “Mmm, I suppose so,” she says. But the humble Tup, who lives at the RSA Village in Mount Maunganui, doesn’t really like that recognition and doesn’t like talking about it.

Last week she was a re-crowned as National Seniors Tennis Champion. By Friday night, she was selling raffles at the RSA accompanied by a quiet drink. Tup’s tipple is a vodka.

There appears to be only one thing that could derail this connection with tennis that began 74 years ago in 1945 on an asphalt court at Turua, on the Hauraki Plains, with a heavy wooden racquet strung with cat gut.

“It’s hard to find any girls in my age group to play with,” says Tup. “You go down to the Mount tennis club, and to find someone around 80 to play singles with is very difficult.”

She is disappointed and frustrated, when everyone else probably understands why. That’s life, they’re a dying breed. Tup chuckles, then sighs.

Because the winners of the seniors titles form a New Zealand team to compete at the Worlds in Croatia. It would have been nice to go. “But we couldn’t get enough ladies in the 80 age group,” she explains. “That’s so sad.”

Fitness is the strength of her game. “I belong to the Women on Wheels cycling group at Paengaroa,” she says. When a lot of women of her years would understandably have compromised mobility, Tup and the ‘girls‘ are cycling 30-to-40 kilometres, three times a week.

Then there’s three tennis matches per week. That’s enough to give her the court speed and the explosive fitness needed for competitive tennis.

Except – and it’s a big except – Tup can feel Andy Murray’s frustration right now. The champion is laid up. There’s a large plaster on her leg after she “took a bit of skin” off in a cycling incident. A big toe, sans nail, is also heavily dressed. No, we may not take a photograph of her and her dicky leg!

“It’ll kill me being laid up for a week – I hate it. I need to be out doing something.” For Tup, that’s tennis, cycling, or both.

Roger Federer unwittingly helped her through an injury. She watches the Grand Slams on TV, and when she was suffering a shoulder problem, she noticed how the Swiss master released the ball for his serve, and how he kept his head high.

She’s always been self-coached – she simply watches, listens, learns and then applies. Federer would also be proud to know she plays her backhand unfashionably with just one hand, just like him. “It’s probably not as effective,” she happily concedes.

It’s the forehand that has served her well. That has been her go-to weapon. “That’s my strength,” she says, as 54 National Seniors Titles would testify. “It’s deadly,” she jokes. Then she bursts out of her seat and grabs her flash, expensive racquet – $290 worth – for the photo. No leg or toe of course.

There’s definitely another five seasons of seniors in Norma Lois – aka Tup – Cox.

She has her favourites, such as Andre Agassi, the showman and entertainer who bashed every ball like his career depended on it. Some called him bold and aggressive, others called him a brat.

“The histrionics are part and parcel,” she claims. “If you have played the game, you will understand the frustrations sometimes.” However, Tup has always been a ‘lady’ on the court – she’s never thrown a racquet and loses with dignity, but she does talk to herself a lot.

When The Weekend Sun arrived at the Mount RSA retirement village to talk to Tup, we were met by some maintenance men. “You must be here to talk to Tup,” they said. “She deserves it.” Tup’s not just known here, she’s admired and loved.