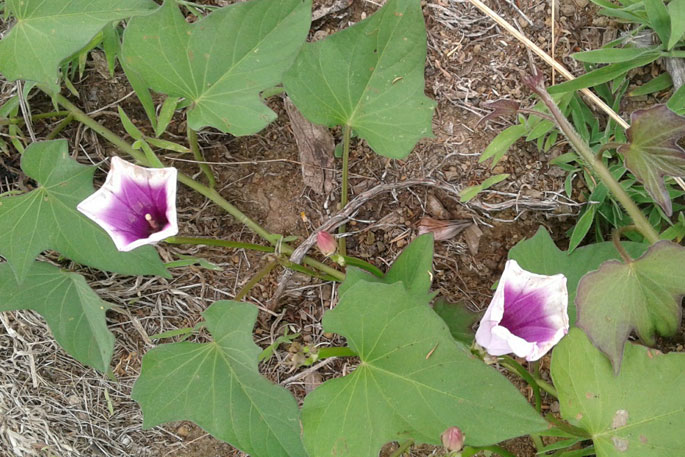 The response has been consistent from seasoned kumara growers and experts. “Nah, never. I can’t remember ever seeing that. It’s very rare.”

Jenny Lucey’s botanical curiosity at Aongatete - a rarity in fact - has got people talking.

“We have noticed that one of our red kumara plants is flowering,” said a surprised but delighted Jenny in a message to The Weekend Sun. “This is the second year we have grown the red kumara, but the first time we have seen flowers on the plant.”

Upon making the discovery, she quickly fired up her computer and did some research. “It’s very rare for kumara to have flowers.”

Steve Webb knows his kumara. He has plenty of experience with the sweet potato and is currently Toi Ohomai’s horticulture programme manager. His family had a nursery in Hawkes Bay, and kumara is a crop they grew every year.

“I have been involved for a long time,” says Steve. “I personally have never seen one flower. I asked my Mum, I asked my Dad and I asked a couple of growers at a seminar we held this week. No-one can remember seeing them flower. It was ‘nah, I’ve never seen that’.” It is a rare event indeed.

Jenny can’t offer any explanation, and says she didn’t do anything unusual. “Other than a bit of compost, some blood and bone when planting, and watering every now and again, I didn’t give the red kumara any special treatment,” she says.

The plant was purchased from The Onion Place in Katikati and she told them about it. “They said it must be a special plant as they hadn’t heard of it.”

“It’s a bit like trees. People brutalise them, and the next year they say ‘wow, it’s flowered so well’. The following year it dies and they can’t understand why.”

There are about 50 cultivars – cultivar as in granny smith is a cultivar of the apple - under the name ipomoea batatas. “The kumara we are interested in here in New Zealand are the ones we can eat, the ones we see at the supermarket – the orange the white and the red.”

But there are others in the same genus and species which are grown for the flower. And they don’t fruit at all. “They are bred differently for a desirable characteristic – it might be for fruit, which we as humans have been doing for hundreds of years, or it might be for flowers.”

Two years ago, an amazed Auckland man reported flowers growing on a red kumara in his inner city Freemans Bay garden. The experts in the kumara capital of Ruawai in Northland were consulted. One man who had worked with red and gold kumara for 30 years said he had never seen one flower. However, the orange kumara would regularly flower.

He attributed it to the time of year when the day is shortening and something is stressing the plant. It was more common to see the kumara flower up North under drought conditions. There was also a larger volume of kumara growing up North, which would improve the odds of seeing a kumara flowering.