Speed and daring will be tested in IRB racing 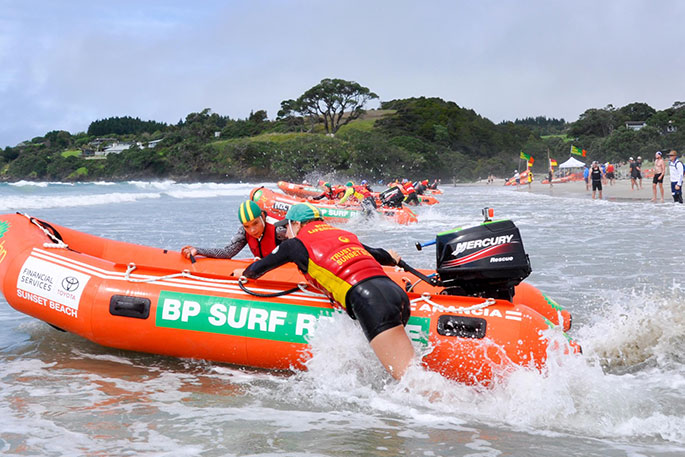 Engines will roar, and inflatable rescue boat drivers will push themselves to the limits, to find the IRB North Island Champions, at Waihi Beach this Saturday and Sunday.

A total of 58 IRB rescue boat crews from 17 Surf Life Saving NZ clubs throughout the North Island will be racing in the BP North Island IRB Championships.

“They’re getting in there fast to pick up people, or multiple patients, and you have races where a crew member will jump into the water to support a patient, events where they assemble the IRB on the beach then race, and relays.”

In November the New Zealand team, from Sunset Beach in Port Waikato, won the inaugural IRB world championships in Australia, and some of those athletes will be racing in this competition, says Scott.

“They’ve got 12 crews coming from Sunset Beach, and they’re really the dominant club at the moment - they’re the best in the world.

“Some of the other big contingents are coming from Waihi Beach, Mairangi Bay and Kariaotahi Surf Life Saving Club [Waiuku]. So there’ll be people there for the win, looking to knock them off the perch, and if the surf’s challenging anything could happen.”

A big swell is forecast for the competition at Waihi Beach this weekend, so the racing could be tough, with big waves adding another exciting element to the mix.

“It’s going to get a little bit gnarly trying to navigate the surf.

“That’s near the upper limits of what we’d reach in racing. That’s challenging conditions, but they’re certainly capable.”

IRB racing replicates the skills needed in real life rescues, and the athletes taking part are all active surf lifeguards, who patrol for their clubs, ready to save lives.

IRBs are used in about 80 per cent of rescues. Their use - both in training and extreme rescue conditions, led to the development of the sports circuit, where lifeguards hone their skills.

Scott says IRB racing is one of the most exciting lifesaving sports to watch, and the Waihi Beach Lifeguard Services clubrooms have a café and bar, and there will be a commentator.

“Come on down, it’ll be a spectacular show."