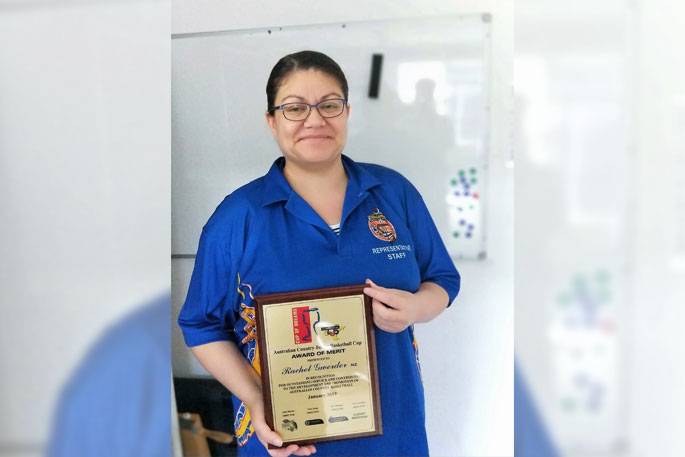 Anyone who knows Tauranga basketball coach Rachel Gwerder will not be surprised to learn she has been awarded the Australian Country Junior Basketball Cup Award of Merit.

Rachel is just the third New Zealander, after luminaries of the sport Mel Young and Robyn Ruka, to be honoured with the award since 1992.

The prestigious accolade is recognition for outstanding service and contribution to the development and promotion of the major junior Australasian event.

Rachel has been taking New Zealand junior players on what is known as the NZ Koru Tour to the tournament since 1998.

Her dedication to the sport knows no limits.

When she first went to the event she was seven months pregnant.

“I didn’t tell Basketball NZ at the time because I was so passionate about going on the tour and getting experience in international coaching,” she says.

Winning the award at this month’s tournament, held in Albury, NSW, was something Rachel thought may come at some stage.

“I had it in the back of my head that over the next couple of years I may be receiving the award, but to get it this year was a bit if a surprise to be honest.

“I am really honoured to be listed in next year’s tournament booklet alongside Mel Young, who is one of my mentors, and one legacy of his is the Koru Tour he started.

“Robyn Ruka is a stalwart of basketball as well. So to have my name alongside those two, as well as all the Australians who have given so much, makes me feel quite chuffed and honoured.”

Rachel was doubly delighted this month to have such a high percentage of Tauranga basketballers involved in the tournament, and her 20-year-old daughter Cairyn-Marie made her coaching debut at the event.

“She is going to blaze her own path as a coach,” says Rachel. “I suspect she is the youngest coach to ever go on the Koru Tour from the New Zealand side.

“Out of the 10 teams of 100 kids we took over there, we had 21 children from Tauranga. That is a huge percentage and something I think Tauranga should be really proud of.”

Basketball is booming in Tauranga and right across New Zealand, says Rachel.

“Basketball is in a fantastic space. The numbers are exploding.

“There is definitely the Steven Adams factor, but I think the game sells itself. It is exciting and quick and spectator-friendly, as mum and dad can watch inside out of the rain, and fits in with this generation of players.

“Also, the growth in coaching is available. There is lots more video analysis which is attractive to kids.

“We have more rep teams than we ever had, especially in the boys’ programme. What that leads to is a stretch on resources - but that is our job, to try and meet demand for coaches, volunteers and especially facilities.”