Strike up a low maintenance love 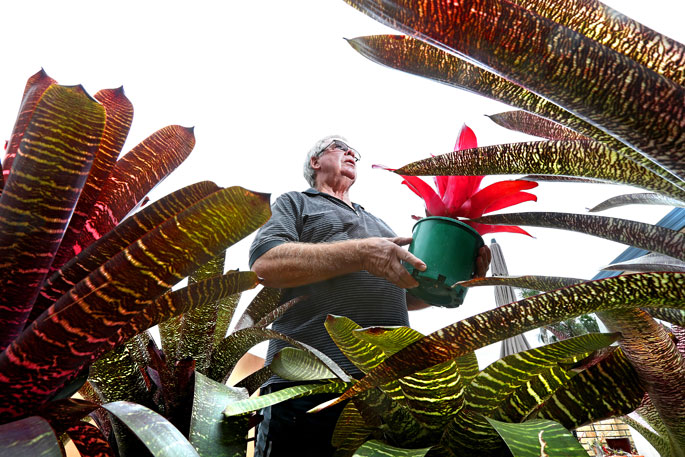 700 plus specimens – Ralph Starck and his bromeliads. Photo: John Borren

Then the phone rang, so Ralph gave up counting the forest of bromeliads that surround his Papamoa home.

“I knew that would be the first question you asked,” says the bromeliad enthusiast and borderline obsessive or fanatic. He cheerfully accepts any of those labels.

He reckons he was about two-thirds of the way through the count, so let’s say Ralph has, conservatively, around 700 startlingly beautiful bromeliads in his garden, on all sides of his house.

Look around his Tuihana Drive home and all you can see are exotic bromeliads, effusing a sense of the tropics and sun-kissed climates of the Americas and American subtropics where the 3475 known species of bromeliads hail from.

But hang on - Ralph is not all-consumed. “I also have a lemon tree, a mandarin tree and a tomato plant,” he reveals.

His obsession with, or rather his attachment to, bromeliads started 25 years ago. He wasn’t even a keen gardener when he went to a bromeliad society sale. “I bought one or two, liked them and just kept buying, growing and collecting.”

Ralph will be imparting some of that quarter-of-a-century’s worth of accumulated knowledge and wisdom at the Bromeliad Club open day at Tauranga yacht Club, Sulphur Point on Wednesday, February 13, between 12.30-2.30pm.

There will be displays and sales, including rare plants, as well as advice.

But why bromeliads, Ralph? Why not some of the beautiful classical flowers like roses, lilies, daisies, orchids or carnations. It’s simple, he says. “I don’t like flowers.” He likes long spiny leaves, showy bracts and rich tropical hues. In other words, he likes bromeliads

“You can’t grab a rose by the scruff of the neck, haul it out of the ground and transplant it. It won’t work.” But it seems you can with a bromeliad. “They’re rugged and very forgiving.”

“They’re long lasting and low maintenance,” says Ralph. “Just add a bit of water, a bit of fertilizer and then leave them to do their thing.” That’s how he will pitch bromeliads to the uninitiated at the Bromeliad Club open day next week. “Easy care,” says Ralph. And men like easy care.

His wife doesn’t share his passion. “But she’s a weeder and a very understanding woman,” says Ralph. So festoons of family bromeliaceae at number nine are no cause for conflict? “No, no. As long as I am using my own money for bromeliads, it’s all good.”

There are those people who pop by Tuihana Drive to buy bromeliads. “As soon as they see my collection they go ‘oh my God! Wow!’ But I have seen bigger collections than mine. There are other people more obsessive and weirder than me.”

Perhaps that’s better judged by the 159,700 potential readers who meet Ralph Starck in the columns of The Weekend Sun today. “I don’t mind at all,” he says. “I am used to being weird and it grows on you.” He’s not weird - he is a charming, funny and a passionate retiree who will happily share his vast knowledge of bromeliads at the open day next week.

But be wary – bromeliads draw you close, grab you and won’t let go. With that in mind in, Ralph jokingly offers one key care tip for bromeliads. “Choose a different kind of plant. No, I love them.”

All that aside, he has another hobby - photography. But he doesn’t take photos of his bromeliads. That would be excessive behaviour.