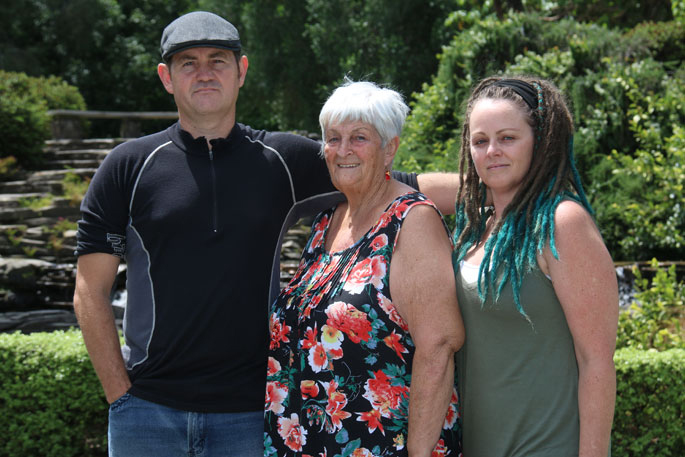 Rowan is the only one of her two siblings that hasn’t been diagnosed with the inherited disease that causes the progressive breakdown of functions, such as movement and thinking.

She has a 50/50 chance of testing positive, but she has been preparing her whole life for this ‘what if?’

Her mum Dianne Boyle says Rowan’s dad, Jacky, contracted Huntington’s disease passed down by his mother. That’s where it all started.

At the time, Dianne and Jacky’s doctor wasn’t as knowledgeable about the disease and didn’t understand how genetics worked.

“He said it had obviously been wiped out in our family because my husband and his brothers hadn’t shown any symptoms,” says Dianne. “The doctor didn’t understand the genetics of it all and said Jacky was all clear.

“So I had three children and when my youngest Rowan was two-and-a-half, I got a letter from my husband’s eldest brother, to say he’d been diagnosed with Huntington’s.

“At that stage they hadn’t discovered the gene, so there was no test. Instead, you had to wait until the physical signs had become apparent.”

As time went by, they discovered that Jacky had it too, but the majority of his symptoms were mainly mental, not physical.

Rowan says it was sad to watch, but helped her better understand what people with Huntington’s disease go through.

“It was shocking for me as a young person,” says Rowan, “but I think it’s really equipped me well for now, as I’m about to go get tested. Growing up in that environment has prepared me well if I have it.”

The test involves two counselling sessions, followed by another to get their results, where the gene in found through a blood test.

“With the gene there’s a specific repetition of gene sequence,” explains Rowan, “so normal people have up to a certain number and then there’s a grey area where you will have the gene, but won’t show symptoms. Over that number is where you have Huntington’s symptoms.

“Everyone has the gene for Huntington’s disease - it’s just the amount of repetition of that specific code that directs your body to producing the protein that causes Huntington’s.”

Most people with Huntington's disease develop signs and symptoms in their 30s or 40s, but the disease may emerge earlier or later in life.

“I had an inkling before I had the genetic test that I had Huntington’s,” says Jamie. “My memories and my ability to talk decreased and I started getting frustrated at work, because I couldn’t say what I wanted to say.”

He also found ways to deal with the twitching of his body which has gradually appeared over time.

“You find ways to deal with it. For me, I always have my legs tucked behind me when I sit down, so that they don’t fling out and I need more space,” says Jamie.

At the age of 38, Rowan says she has decided to get the test now, because she wants to prepare her family for what may happen.

“I’ve got a partner now, and we are planning a life together,” she says. “I just want to know for sure where it’s going to go and how it’s going to end up. It’s not necessarily for me, it’s more for him.

“I want him to be able to prepare because he only really knows about Huntington’s from the TV show House, and a few things that mum might have mentioned in the past. I don’t think he really has an idea about what could be in store for him.

“It’s also about mum as well. I can’t imagine what it would feel like for her to see her whole family taken by this disease. That’s what breaks my heart the most.”

Rowan admits she has had many moments over the years where she thought she was starting to develop signs of Huntington’s.

“I’m a nurse,” she says, “and Tauranga Hospital has these really grippy floors that I’m constantly tripping up on. Other people say that they do it too, but I’m thinking maybe that’s a sign I have Huntington’s.

“Things will sometimes slip out of my hands and I’ll think ‘oh my god it’s starting’.”

“I think the results will put my mind at ease with things like that. I have two visions of the future, and I’d rather be focusing on just one of them.”