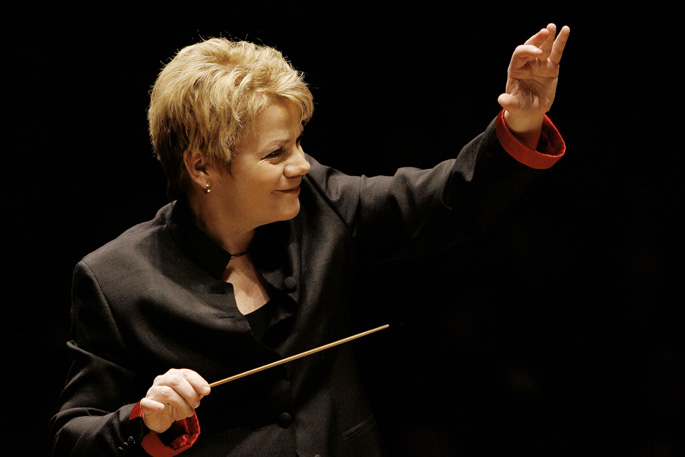 All Together: A Global Ode to Joy conductor Marin Alsop Photo: Grant Leighton

The New Zealand Symphony Orchestra is to be part of a unique international project celebrating Beethoven’s 250th birthday next year, which will include school and youth choirs performing the composer’s famous Ode to Joy in te reo Maori.

The NZSO will join acclaimed orchestras in Brazil, Britain, the United States, Australia, Austria and South Africa in performing Beethoven’s Ninth Symphony with the Ode to Joy segment sung in local languages of each country.

The NZSO’s performances of the Ninth Symphony will also incorporate new works by New Zealand artists reflecting the cultures of New Zealand.

All Together: A Global Ode to Joy is the brainchild of the prestigious Carnegie Hall in New York. The NZSO has worked with leading American conductor Marin Alsop and the institution for the past 12 months to be part of the project, with the New Zealand concerts to be known as Kia Kotahi: He Toirangi A-Ao Kai Harikoa.

The NZSO will join eight other orchestras on five continents which perform the Ninth Symphony between December this year and December 2020.

Maestro Alsop, a strong advocate for young people and diversity in the arts, will conduct every performance of the Ninth Symphony by each orchestra, including those by the NZSO in major centres in late July and August next year.

“Ode to Joy is about standing up and being counted in this world. It’s about believing in our power as human beings,” says Maestro.

“Everyone will be tied together by this experience. And I think that’s the important element – that through this project, we will bring diverse communities together, and communities who don’t normally work together.”

The te reo Maori translation of Ode to Joy will also be made available as a learning tool, with nationwide distribution, providing an opportunity for young people around New Zealand to be involved in the project’s wider reach.

NZSO Head of Artistic Planning Lucrecia Colominas says it is an honour for NZSO and New Zealand to be part of Carnegie Hall’s initiative and to welcome a conductor of Maestro’s standing on a project that involves young New Zealanders, New Zealand composers and diverse communities.

“Kia Kotahi is a reimagining of Beethoven’s magnificent Ninth Symphony, which is one of his best known and loved works. Ode to Joy sung in te reo Maori by our young people will be breath-taking. This is a fantastic way to celebrate the genius of Beethoven, our youth and our own rich culture.”

The first All Together: A Global Ode to Joy concerts will be performed by the Sao Paulo Symphony in December this year.

The project will culminate with a concert at Carnegie Hall in December next year.

Beethoven’s Ode to Joy, sung in the Ninth Symphony’s fourth movement, is based on a poem by Friedrich Schiller, which calls for equality, freedom and fraternity among people.

More details about Kia Kotahi: He Toirangi Ā-Ao Kia Harikoa will be announced in the coming months.