Creating his own superhero 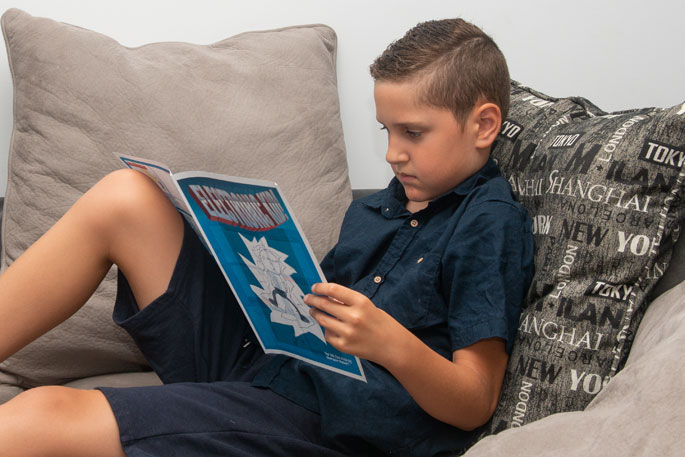 He’s a young creative and a budding entrepreneur. He’s also self-published and soon to be on the shelves.

Did we mention that he’s also nine-years-old?

Young Sherakin Walker has authored, drawn and started processing 28 of his very own comic book creations, and they’ll soon be on sale at Four Square The Lakes. Dad Shannon says it all started when his son Sherakin spent his time drawing characters from the Captain Underpants franchise.

“I said ‘you should really try to think of your own superhero instead of copying Captain Underpants,’” says Shannon. “I didn’t really think about it too much, and then two weeks later he started his own comic character, Electronic Kid.”

The comics are based around five main characters that fight crime together.

“There’s a few potty jokes in them, but they’re mostly about empowering kids,” says Shannon.

“He’s got five main characters that go through all the comics, and he wants to make something happen to them; they all get their own superpowers.

“They’ve got a very positive message behind them.”

Once the comics were written, illustrated and printed, Shannon organised a meeting at Four Square The Lakes to see if they would be willing to buy some copies of Electronic Kid.

“So he went and chose Four Square The Lakes – they back lots of little projects and the guy that runs it is a really cool dude.

“He went down there and had a bit of a meeting with the boss, then his comics got sold to the owner of a company, which is really cool.”

“I think it’s really cool and I said to him ‘we’d love to sell them in the shop’,” says Anthony Pedersen of Four Square The Lakes.

Sherakin knows he’s on to something special – he says he “definitely” wants to do this as a full-time job when he grows up, and the kids at school think he’s pretty cool. “He said to me when he was seven that he wanted to be an illustrator of his own comics, so I told him we’d work on it,” says Shannon.

“When I was seven I would have said ‘ride motorbikes’ or ‘play army men’ or something.”

Sherakin has worked on around 28 comics so far.

Each comic is five-to-seven pages long, hand-drawn and edited by Shannon’s sister, Heidi.

“My sister is going to design them,” says Shannon, “so we send the rough pen copies down to her, and she does all the backgrounds, puts the words into comic-book style bubbles, all of his drawings and his story goes into it, and she sends them back in colour with all the right fonts and everything.

“Then we get Sherakin to check everything over.

“We give him some little pointers, but a lot of the pointers he doesn’t want to know about, but the important ones he does.”

“When my Mum says there’s a new Electronic Kid, I get excited and run straight to the computer and have a look at it,” says Sherakin. “I make some changes, just in case some bits need fine tuning.”

But it’s not all fun and games. Shannon says he’s also trying to teach Sherakin a little bit about business. “He needs to realise at a young age that you don’t get all of the money you make.

“It’s not a lot of money at the moment, but it’s making it self-sustainable.”

Sherakin might understand that the money has to be saved, but the Teenage Mutant Ninja Turtle toys are calling for the little bit of money he gets to spend.

“I’m saving it up and spending it,” says Sherakin.

“I’m spending it on Ninja Turtles. Leo’s my favourite.” And his dream has expanded from comics to possible big-screen movie magic.

Shannon says Sherakin was working on a movie script for Electronic Kid in his own time, during the school holidays on the family computer. “It was really weird seeing him typing on the computer. He’s actually pretty fast - he does the one finger-type,” says Shannon. “The thing I like about it the most is he’s really creative with his story,” says Shannon. “We wanted to keep it as much his as we could; we didn’t want it to be something we did.

“You can learn to do things, but you can’t really learn attitude. It’s all him and we like that.”

If you think you can help Sherakin and his comics – either with his writing abilities or financially to get the comics printed on glossy paper – give Shannon a call on: