‘Old age not a disease’ says creator of ward cafe 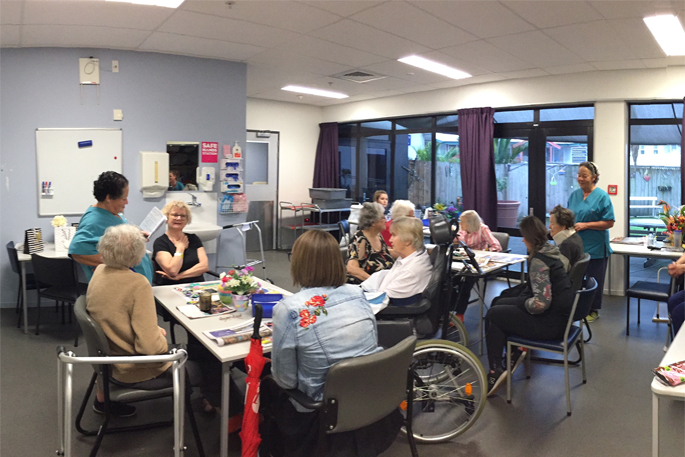 Combatting feelings of isolation in the elderly by increasing social interaction is the idea behind a successful ward-style café being run at Tauranga Hospital.

Every Monday and Thursday the Health in Ageing Ward’s patient lounge becomes a hive of activity as patients mingle in their very own café. The idea was the brainchild of Healthcare Assistant Josie Bidois and Physio Assistant Annie Duffy as a way of improving patients’ rehabilitation journeys and wellbeing.

“A lot of our patients are at the stage in their lives where many of their friends have passed away,” says Josie. “They can become quite isolated and lose confidence to interact with others. And that feeling can be compounded by health issues such as having a fall or suffering a stroke. The café style setting encourages patients to get up and out of their rooms, talk to each other and make connections,” she adds.

Food for the café is funded with donations from families and Josie organises the weekly menu, trying to keep it varied. It operates like a normal café except there are no café workers, instead staff including doctors and nurses serve the patrons.

Josie has been working on the Health in Ageing Ward for more than 16 years and is a firm believer in Reminiscence Therapy.

“It lifts their spirits when patients can talk and reminisce about the good old days and a lot of laughter can be heard throughout the ward,” she says. “There’s a real café atmosphere. Staff can join in too on the proviso that they bring a patient with them.”

Feedback from patients and their families has been very positive. The concept is proving so popular that housie, and quiz sessions have also been held in the café. An outdoor dining area, complete with small plants and flowers donated by Josie and others, has also been added to give patients a burst of sunshine on a fine day.

Josie says she works to the motto of American elder rights activist, and founder of the Gray Panthers movement, Maggie Kuhn: “Old age is not a disease.”