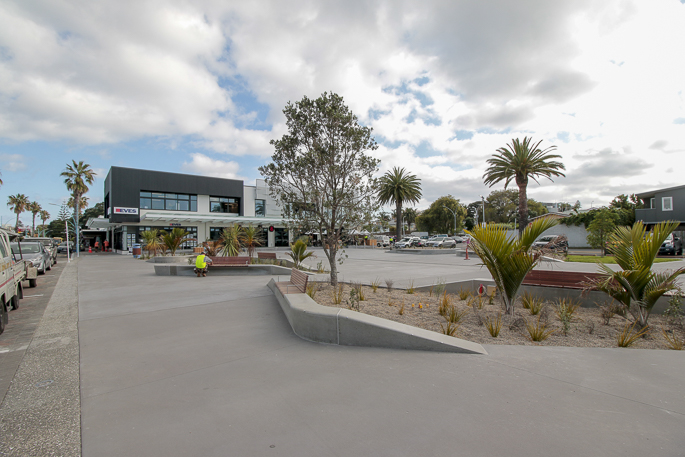 The yet to be finished old Phoenix Car Park development in Mount Maunganui. Photo Supplied.

Backlash over the development of the urban open space on Mount Maunganui has prompted Councillor Leanne Brown to try and set the record straight.

People have complained it’s a waste of money, there’s a lack of car parking space, the amount of concrete is an eyesore and have questioned where the promised greenspace is.

Leanne, the Deputy Chair of the Community and Cultural Committee, says there’s misinformation about the development.

“I acknowledge the complaints, concerns, problems and queries regarding the old Phoenix Car Park,” says Leanne on her Facebook post.

“It is not complete yet. There is more grass, planter boxes and shade trees to be planted.

“I will ask about more shade and seating.”

She has also addressed what she thinks are some of the misconceptions about the urban open space development.

“It is not and never was intended to be a ‘green space’ as we have plenty of parks already,” says Leanne.

“It was always consulted on as an ‘urban open space’ with some grass.

“It is not and never was going to be a ‘skate park’.

“I’d rather young kids scoot or skate around the space in the interim than be indoors on devices.

“There is a water feature that will soon be operational. This will deter skateboarders and create ambience. 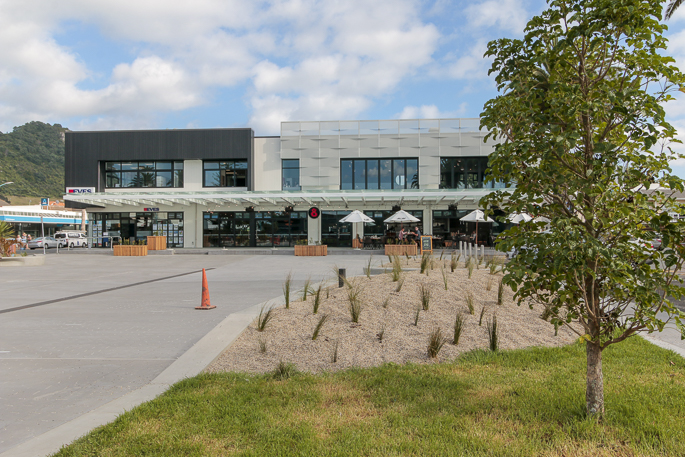 “The toilet block will be refurbished in Feb/March as part of this project.”

Leanne has also acknowledged the cost overrun of the development.

She says once the council makes a decision on a project it becomes ‘operational’ and is managed by staff and contractors etc.

“It only comes back to us when something goes wrong ... and it did,” says Leanne.

“The ridiculous budget blow out meant more concrete and less features and we are bitterly
disappointed with the end design.

“It was paid for by Developers Contributions not ratepayer funds. (The disappointing budget blow out that we knew nothing about, had passed the point of no return!)

Leanne says there’s a legislative requirement that Developers Contribution can only be spent on a limited public amenity.

She says it can’t be spent on things like toilets or playgrounds.

“It must be open space and in this case, had to be spent in the Mount North area,” says Leanne.

“The Developers Contribution needed to be spent by 2021 or returned to the developers ... many who built the high rises (that leak) or no longer operate, sold, moved on and are not contactable.

“The urban space is designed to accommodate events, which Mount Mainstreet advocated heavily for.

“The weekly Farmers Market is back their soon.

“New car parking spaces were created to replace those in the car park.” 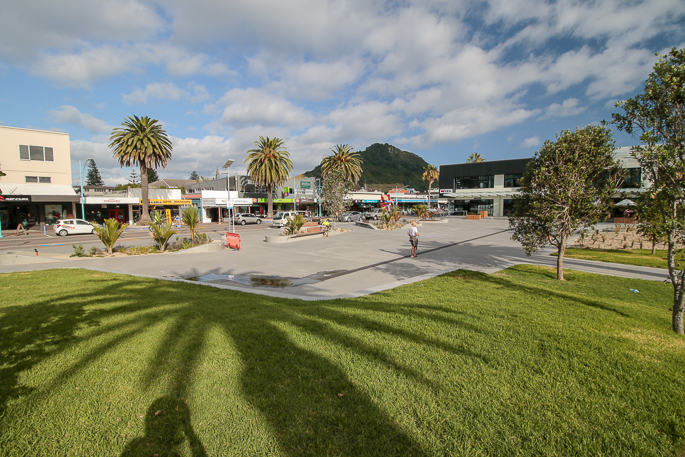 This council absolutely detests cars. They have been removing so many car parks it is getting ridiculous. Yellow lines are going up where it was previously safe to park. The council are applying ridiculous rules to minimum clearances in order to get rid of parks . The phoenix car park is simply part of their war.

remember all the moaning about the waterfront car park! now look today, we love it and events down town do well because of it. same old, same old, we just need to grow up as a city and stop moaning about change!

This highlights TCC management capabilities ie no budget control and cost over run.Why? Because it is not their money, and poor planning, poor controls and no accountability. If it was their own personal project, there would be no cost over run like this.

In my opinion this is a poor design that was implemented badly. Green spaces would be cheaper to install due to less concrete. The public were happy with what was there so why not just tidy up what was there and improve on it. Spending money just because you have to is a poor excuse to give people something they don’t want.

It would be interesting to see a break down of money spent on this .Half a million dollar blow out is not something that should be let go."The ridiculous budget blow out meant more concrete and less features and we are bitterly disappointed with the end design". Not exactly what I want to hear from somebody elected and paid to look after ratepayers money wisely.

What a load of bollocks

Talk about verbal diarrhea . One statement the project not finished yet, then we read about a budget blow out and trying to pass the buck by saying by the time council heard about it,s too late to do anything.Whose gonads are on the line? Councillor Brown comments appear to be full of contradictions ,never intended to be a green space but a urban space with some grass that,s not the artist,s impression,then as a result of the blowout more concrete and less features.There are more items to be added Is this further budget blow out? Perhaps she can confirm how the water feature will deter skate boarders and not jo public? Why didn,t you just leave it alone.

Thank you Leanne for shedding some light on this

development. At least we now know the full story and don’t have to guess anymore. That’s some budget blowout!!! How did that happen? Looking forward to seeing it finished.

So what council employees ARE responsible for the cost blowout......and what is their accountability????

when are the lines getting painted....., need to park my car somewhere

The misconceptions are all Cr Brown’s. She says the money does not come from ratepayers , but from developers. If she spent a few mi nutes thinking about that, ( or a few hours if it takes that long ) she would realise that developers are charged the fees by COUNCIL STAFF , who are following council descisions made on advice and recommendations made by staff in the first place! Those fees add to the cost of a building and to future valuations .The cost of the building and future rates are all determined by the valuation, and ultimately borne by the ratepayers...either building owners or end users....So if they had to use up this money, they shouldn’t have charged it to the developers in the first place...Council unnecessarily adding to inflation. TCC staff have proved over and over again that they can’t manage anything. HOPELESS!

Should have happened before summer started

Lots of words from Leanne Brown. The bottom line is this should have been well completed before the summer and holiday period. Council are very good at talking about what they INTEND to do. We know what happened to the consultation process about the new name. They give it lip service and then it is business as usual and they do what they intended to do anyway.

$2.5m for a load of concrete and a few chairs so half a dozen people can sit in the sun. Everybody else can sit on the sizzling concrete and fry. This is just more typical TCC waste. Spending money not only needlessly but wastefully. Even if the end result was good and useful, which it won’t be, how does it come to $2.5 million? It’s just contractors taking the p*ss. And why is a design and spec not tendered and contracted on a set price? Coming back for is taking the p*ss. TCC is just one huge p*ss take. Ratepayers are the butt of the joke. And it’s typical spin and bluster from Councillors. The only information I need is $2.5m and my eyes. The rest is blablabla

I went there yesterday because....

I cannot make negative comments....or otherwise....without experiencing the place. My view?....it could have been fabulous but no, it is about 80% concrete, 10% grass and 10% ’random cheap plants’. It was a blazing hot day and my friend and I sat under the only tree offering any kind of shade. Two kids on scooters were there for about 5 minutes otherwise it was empty. :( What’s needed?? Remove the concrete to leave only concrete ’pathways’. Plant HEAPS more grass and shade trees and have ’shade/shelter covers’ over the bench seats plus MORE bench seats. THEN and ONLY THEN will people actually be ABLE to ’use’ the space. Who wants to sit on burning hot concrete in the summer or cold wet concrete in winter? Only fools. I guess that means it’ll be only be used by the idiots who ’pushed it through!’ Utter crap! Fixit!

Why weren’t a choice of plans put to the public for consultation before this eye sore was accepted! If a priced contract was in place then budget blowouts should have been met by the contractor! Half a million over run is farcical - why did TCC pay out? Grass is cheaper than concrete! Ms Brown says “The ridiculous budget blow out meant more concrete and less features and we are bitterly disappointed with the end design". Well Boo Hoo - so are we all. If Ms Brown was deputy in charge of the project - why was it left to go ahead to the point of ’no return’? Tear those silly wisps of reed out and put some green ground cover in! Put some decent seating - with back rests please! Forget the ’water feature’ as they cost the earth in upkeep

Perhaps if the public was told where the new carparks are could be helpful. Obviously not along the beachfront, where more & more carparks are being taken away & replaced with weird pink curbed nothingness. Here’s an idea for the baphoons we employ at Council. Instead of spending money on a skatepark, why not use that money on road sweeping so that cyclist can safely ride their bikes on the road without the constant flat tyres associated with Tauranga roads. Have a look down Maleme St, Oropi Rd, Cameron Rd, Waihi Rd etc gravel, glasss, bits of metal everywhere in the " cycle lanes", meaning cyclist drift wider. It seems to be mostly staff in factories / commercial areas who ride our streets to work. More cyclist, less congestion.