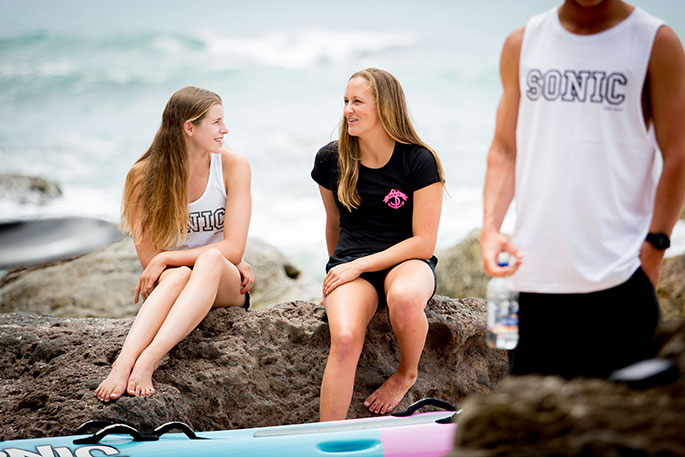 New Zealand representatives Claudia Kelly (left) and Olivia Corrin will be battling each other during this weekend’s Eastern Region championships in Gisborne. Photo by Jamie Troughton/Dscribe Media.

The locals are ready and a young invading force has assembled, as Gisborne creates a little bit of surf lifesaving history this weekend.

Midway Beach is hosting the Eastern Region championships, for the first time in the 57-year history of the event.

Typically the second-biggest carnival behind the national championships, more than 530 surf athletes from 27 clubs will line up on Friday night and continue through the weekend in the Tairawhiti Gisborne-sponsored event.

And included in the ranks are 10 members of the world champion Junior Black Fins, creating an intriguing sub-plot in what promise to be sublime racing conditions.

“It’ll be really interesting to see how we stack up against the open competitors and it’s going to be hugely exciting getting to race alongside and against the top competitors in New Zealand,” Junior Black Fins co-captain Claudia Kelly explained. 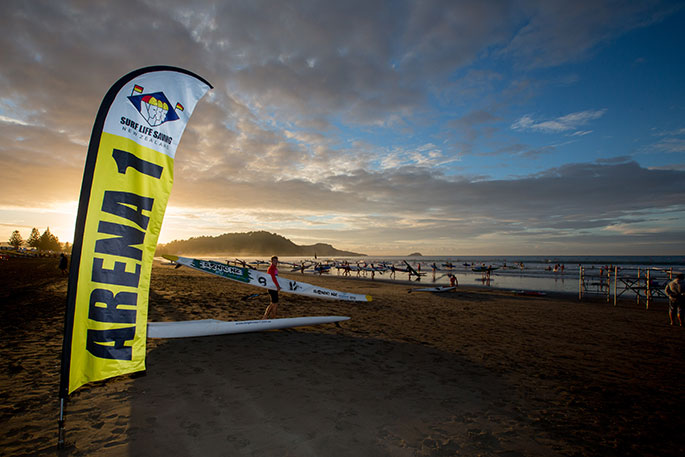 “The next generation of surf sports is looking very strong and it is exciting to watch all the younger athletes starting to come through and show their talent,” says Corrin.

Corrin starred at the recent Champion of the Bays event in Whakatane, after a month’s break to recover from November’s world titles in Adelaide.

She’s targeting her last year in the under-19 age group but more than anything, she’s keen to ensure the first ERCs held in Gisborne certainly won’t be the last.

“I love racing at my home beach Midway and I’m really excited that the ERCs are going to be held here. With all the out of town athletes coming in to town, it brings an exciting and positive vibe to the Gisborne community, which is really great.”

As well as hosting the ERCs for most of the past three decades, Mount Maunganui have also dominated the overall point score, having won the last eight titles.

Midway was the last Gisborne club to win, a double success in 2008 and 2009, and resurgent Waikanae - boosted by the return of champion kayaker Quaid Thompson this weekend - last held the ERCs trophy way back in 1989.

Mount will take some stopping, however. The 65 athletes assembled is the biggest team coming, featuring Mount Monster endurance winnner Declan Dempster and previous winner Hamish Miller, as well as a sprinkling of Great British and French internationals.

Red Beach are the next biggest team, with 47 athletes, followed by Omanu (40), Waikanae’s 37 and Ocean Beach Kiwi’s 34. Keep an eye out too for Mairangi Bay’s canny ranks, while Otaki has been boosted this year by a clutch of Wellington talent, including Burns and Mount Monster female winner Ella Kingi.

Eastland Community Trust has given a $20,000 distribution to the event, designed to create a festival-type atmosphere on the beach, with grandstands and live-streaming.

The weekend forecast is looking ideal too, with a solid metre of ground swell, hot summer temperatures and kind winds.

Many of the athletes will also be involved in Monday's national representative challenge, featuring 20-strong teams from most of the major regions.