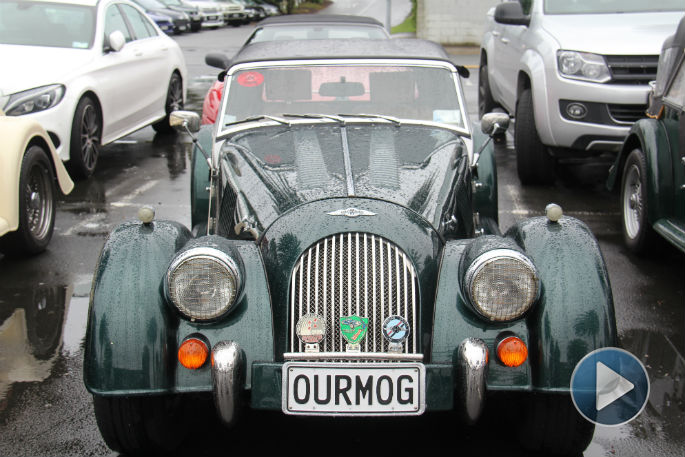 This weekend members of the Morgan Sports Car Club of New Zealand have motored in to Tauranga to stay at the Trinity Wharf Hotel, attend their AGM and enjoy a weekend exploring some of our windy roads.

There are 240 Morgans in New Zealand, including three- and four-wheelers.

20 Morgans rolled in to Phoenix car park Saturday morning, providing locals with the opportunity to chat with owners about the cars.

Yesterday afternoon there were 60 members at the AGM and 51 for dinner last night at Trinity Wharf. Today, club members will be motoring to a lunch destination ‘via devious routes’.

“Morgans never go up the regular state highway”, says Kerry Guy, the registrar of the club. “Somehow or rather they will go up back roads to the McLarens Falls Road, then on for lunch at the Okoroire Hotel. That’s where the Chiefs of course got in trouble a few months back with a stripper. I don’t think the stripper is going to be there today.”

After a stripper-less lunch they will return to Tauranga.

A convoy of Morgan drivers arrived from Auckland, with others motoring up from Dannevirke, Featherston and New Plymouth.

“You could even find the odd Wellingtonian hiding out here somewhere or other today,” says Kerry. “It’s the sort of car you’ll drive down to Art Deco in Napier.”

Club president Allan Duffy is the owner of a 1933, three-wheeler, two-cylinder car. His car was restored in Canada and he saw it in Napier, eventually buying it off a friend.

Club members go away on trips mostly “every few weeks” over summer to Taupo, Napier, and other locations around New Zealand.