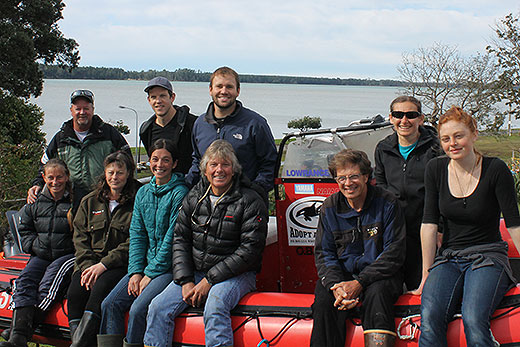 The team of international experts who worked so hard to rescue the orca calf found alone in Tauranga Harbour have packed up and left Ongare Point, exhausted and disappointed that they were unsuccessful.

Known by a number of nicknames including Tiger, Bob and Tama, the orca died in a land based pool in the early hours of Saturday morning, after being placed there for intensive care on Wednesday.

Bittersweet – some of the team who worked to save the orca are from left back Jim Horton, Tyler White of Ongare Point, Mike Patrica. Front Ingrid Visser, Tracy Cooper, Katy Laveck, Jeff Foster, Brad Hanson and Kate Clough.

While the young orca was a long way from full recovery, late last week signs were promising as he was fed first on electrolytes, warm water and cod liver oil, and then fresh fish smoothie.

“However, in the early hours of Saturday morning he took a turn for the worse. As we have seen in other cases, he made several fast laps of the pool and collapsed. We resuscitated him, but at 4.15am he died,” says international orca expert Jeff Foster.

A service involving local iwi, the volunteers and community was held at Ongare Point on Saturday afternoon and iwi took the body away to be buried at an undisclosed location.

“They took us into a lovely home with a big open fire, fed us, exchanged stories and comforted us.”

The support of the Ongare Point community could not be faulted. It has been crucial to the entire operation, including how everyone kept tight lipped about where the orca was both while in the harbour and once he was brought ashore.

“We can’t thank the locals enough for all they have done, including giving us accommodation, keeping us fed and supplying anything we have needed, giving us the time to concentrate on the orca,” says Ingrid.

However, despite all the support, the operation has cost in excess of $30,000, funded by Ingrid’s Orca Research Trust. None of the experts nor volunteers involved have or will be paid. Ingrid admits to personally surviving on “Uncle Visa”.

A fund is being set up in memory of the orca, to help fund the costs of the operation and future orca research and responses. To donate and to find out more about orca go to www.orcaresearch.org/

When she first learned that the baby orca was swimming alone in the harbor, keeping close to a big red buoy off Ongare Point, Ingrid travelled to see him and began working on a plan for his care.

She contacted international expert Jeff for advice and he and another expert, Katy Laveck, flew to New Zealand from the US to assist.

While they could approach the orca in the harbor, they did not have permission to intervene to feed or help him.

Orca are protected marine mammal and although Ingrid, as New Zealand’s leading orca expert, has certain authorisation, she could not intervene in the case of this orca calf without permission from the Department of Conservation.

Gaining that permission was protracted, with days of meetings, requirements for Ingrid to write lengthy reports and prepare exhaustive health and safety plans – all the while the orca was becoming more emaciated, dehydrated and deprived of social contact.

Determined that the orca should have the best possible care, and even though they were yet to gain permission to intervene, Ingrid called on the help of three more international experts, Brad Hanson, Mike Partica and Jim Horton with Ingrid funding their flights to New Zealand.

Jeff says such delays are not unusual anywhere in the world where government departments, with limited budgets, are involved.

For every day the orca calf was alone in the harbour a further four to five days of intervention were required to help get him well enough to return to the wild.

Jeff and the team are convinced had they been able to bring the orca shore and into the pool earlier, he would be alive and eventually able to swim free with a wild orca pod.

While the orca’s death is not the outcome hoped for, Jeff says the team, assisted by so many volunteers, would not have done anything different – except bring him in from the harbour much sooner.

Ingrid says DOC staff, who skippered boats and helped with the on-shore operations, were fantastic in their support.

Volunteers from Waihi Mine rescue and harbour wardens and local iwi also assisted.

Brad says despite the sad outcome, much has been learnt from the experience and local people have had a once-in a life time experience to get up close and learn about orca.

That the orca died is tragic but those involved take some comfort from the fact that in his last days he was fed, felt safe and had the social interaction he craved.

And so the duck-shoving begins.... I’m not to blame, it was somebody else! Woulda, shoulda, coulda...... DIDN’T!!!! I’m no expert, but, I would have thought that there’s a BIG difference between mothers milk and a milkshake.

Dear Surf Lifesavers / Coastguard. If you see someone with an "I’m Captain Sensible" T-shirt on, flailing about in the waves like he’s drowning, make sure you leave him alone and let nature take its course. You’re not expert enough to save his life, so it’s what he would have wanted.

DOC weren’t pushing paper around. They were weighing up whether it was in the animals best interests to take it from it’s natural environment, prod, poke and tickle it to death in a tiny pool. They reluctantly relented to pressure that this so called expert put on Ministers, who then forced DOC staff to give "permission" and assistance - at our cost. Dr Ingrid is not reimbursing DOC for DOC costs in this - we are paying for it. Their reluctance has been proved right. It is a pity it suffered unnecessarily. This is nothing more than wooly headed lefties that think everything can and must be fixed, even if it means heaping on more misery by "trying". Sometimes you have to be cruel to be kind. Rather than being cruel for self gratification. Wrong intervention. Just wrong.

I remain skeptical about all of this but am glad something was done for the baby. And yes it was a learning curve.

So, what did these ’stand-aside-everyone-I’m-an-expert’ people achieve apart from prolonging the misery of a baby Orca? It was more about their ego’s than anything. Leave nature alone. I have had experience with an abandoned humpback calf and as it turned out, what I said was correct. But I have never claimed to be an expert. Please point out what I said that was incorrect.

About you captain. These people did their best they could and no doubt could’ve achieved a better outcome had they not had to wait for DOC to push paper around for days and then of course the twit who thought a lone baby orca important enough to take a selfie with but not to notify someone it was there for weeks. Like they said at least the poor young orca had company before he died, which is very important to them, they’re very reliant on their mothers and pod and usually stay with their mothers for 10-15 years but I’m sure you knew that since you’re such an "expert" on who isn’t an expert!

...on your shoulder there, Captain Sensible. You have been leaving negative and uneducated comments on every story like this for the past few days I see. I find it hard to believe that a reasonable human being can say that the people who devote their lives to caring for and studying marine mammals - in some cases for as long as forty years, are not considered experts. I also cannot understand how someone can read this article and still not grasp the facts. I can only surmise that you are an not a reasonable person.

They are not "experts".

they are not 'experts'

Could you stop calling them "experts" because despite at least being ten of them, they achieved....nothing but prolonging the pain of an animal. Self proclaimed experts maybe.